A triathlon is a multi-disciplinary sporting competition featuring swimming, cycling, and running. You will complete these activities back to back, aiming to complete the course in as little time as possible.

Contents show
1 Can you swim in triathlon shorts?
2 Can you wear shoes during the triathlon swim?
3 Do triathletes wear bike gloves?
4 Do you have to wear a shirt during a triathlon?
5 Do you wear a bra with a tri suit?
6 What do triathletes run in?
7 What should a beginner wear for a triathlon?

The swimming stage is most commonly first, followed by cycling and finishing with running.

You might be wondering how anyone can cycle and run after being submerged in water, getting soaked through. We are asking the same question, which prompted us to ask another question - what do you wear during a triathlon?

What you need to wear for the swimming stage depends on whether it is in open waters or a pool. 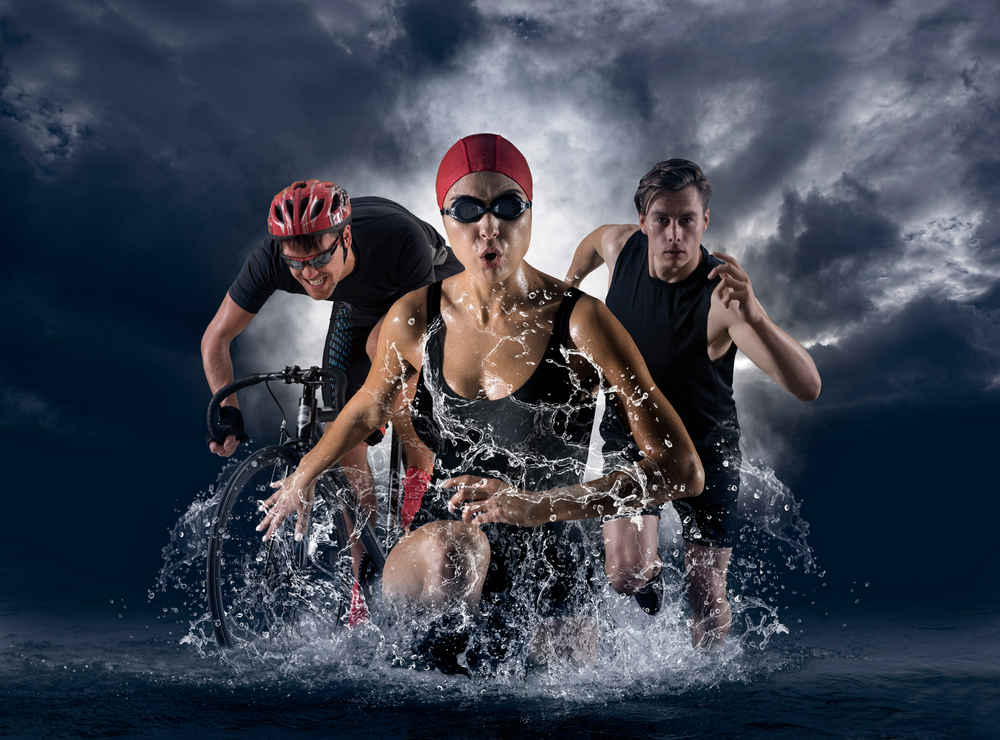 Swimming in open waters requires you to wear a triathlon wetsuit with a tri suit or tri top and shorts underneath. You might also be required to wear a neoprene skull cap, swimming goggles, and a pair of swimming shoes.

For swimming in a pool, it often won’t be mandatory to wear a wetsuit. Instead, you will need a pair of swimming shorts for men or a swimming costume for women.

If you want to save time changing at the end of the swimming portion, you can also swim in your tri suit or tri top and shorts.

A tri suit, or tri top and shorts, can be worn for the entire triathlon and is made from a thin material that is also breathable. The bottom is similar to cycling shorts with a shorter amount of padding to prevent you from coming too uncomfortable while swimming.

The padding will dry out quickly after swimming, but it won’t be as comfortable as you’re cycling.

You can swim in a triathlon suit as it is so thin that it will dry out quickly, but it might be too cold to wear alone while swimming. This is why you’re required to wear a wetsuit over your tri suit when swimming in open waters.

Can you swim in triathlon shorts?

Yes, you can wear tri shorts to swim. Triathlon clothing is created for you to be able to wear it throughout the entire sporting competition so that you don’t have to waste time getting changed between the activities.

The fabric is thin enough to dry out extremely quickly as you’re cycling, so you won’t have to be uncomfortably wet for too long. The padding for the cycle position is thinner than you would find in cycling shorts, making them easier to swim in and allow them to dry in less time.

If your triathlon swim is in a pool you’ll be able to swim in your tri shorts to save time between activities. You won’t need to change from swimming shorts to tri shorts, allowing you to get right on your bicycle and continue the race.

However, if you’re swimming in open waters such as a lake or the ocean, it might be mandatory to wear a wetsuit to avoid getting too cold during the swim.

Can you wear shoes during the triathlon swim?

They are considerably thinner than road shoes and therefore not that comfortable to run in. They have a flimsy heel to keep you quick and as weightless as possible.

They are made with as little fabric as possible to allow for the changes between swimming and cycling.

However, many people don’t get along with tri shoes for all activities. They’ll be full of water while you’re trying to cycle and the lack of heel might damage your feet during the running portion of the triathlon.

For this reason, people often choose to swap shoes between each activity. Instead of wearing one type of shoe that can be used throughout the entire race, they bring along three pairs to swap between the activities.

While swimming, many triathlon competitors will use swim socks or swim shoes. These are made from neoprene and work to keep your feet warm while swimming in cold waters. Neoprene is the same material wetsuits are made from.

Some triathlon rules dictate that you must wear swim shoes if you’re swimming in open waters. This is to keep you warm and protect your feet from debris underwater. Your swim shoes will also prevent cramps which can reduce your performance in the cycling and running portions.

There are no rules against wearing bike gloves during your triathlon experience, although many triathletes will not bother with this accessory. Cycling gloves soak up sweat, keep your hands gripped safely to the handlebars, and can absorb shock should you fall off your bike to the ground.

Gloves can also be cushioned to protect your hands from the vibrations of the handlebars, keeping you comfortable and protected throughout your journey. Cycling gloves are best used by mountain bikers who are planning to cycle for hours on end.

You have to consider how quickly it’s going to be to change into your bike gear after the swim. You’ll be removing a wetsuit, changing shoes, putting on a helmet and possibly cycling goggles, and more.

You’ll be so raring to go and get on the bike that you might not remember you even have gloves. If you do remember, you might not want to waste any more time on your attire to get the gloves on.

It’s true that you can swim in them, although the padding will get soaked through and might make it harder for you to swim.

The padding is not optimized for swimming, so it will likely take a long time to dry, making you even more uncomfortable than if you weren’t wearing any gloves at all. For this reason, cycling gloves are rarely seen sported by triathletes.

Do you have to wear a shirt during a triathlon?

However, this is not the case for every triathlon and therefore you will need to read the rules of the one you’re competing in. Some local triathlons might allow you to complete it shirtless, although we’re wondering why you would want to.

Triathlons are difficult and your body is always moving against itself. Without wearing a top, you’ll open yourself up to chaffing, sunburn, and insect bites.

It also might be distracting for other competitors, and some might argue that you have an advantage over them by wearing less weight.

Tri tops and tri suits are incredibly breathable and lightweight, meaning that you’ll almost feel like you’re not wearing a top at all. It will also dry quickly after the swimming portion so that you’re not cycling or running in heavy, uncomfortable clothing.

So, you’ll have to read the rules of your specific triathlon, but we’d be pretty certain that you’ll need to complete your triathlon in a top.

Do you wear a bra with a tri suit?

It’s up to you whether you wear a sports bra underneath your tri suit, although going without might make your triathlon experience much harder and more uncomfortable. As a tri suit is specifically designed to be thin and lightweight, it will have no support to keep your chest in place.

If you were lighter chested, this might not be a big deal for you. However, if you’re heavier chested, it might be necessary to wear a sports bra to prevent your breasts from squandering your performance.

Competing without a sports bra can make you uncomfortable and purposely slow down to avoid suffering too much. As the tri suit is so thin, it might also not be thick enough to cover your modesty.

Whether you wear a sports bra with your tri suit is up to you and how you feel most comfortable, although most sporting competitions will feel better for women when wearing a sports bra. You’ll be able to focus more on your performance rather than your body.

What do triathletes run in?

Tri suits and tri tops and shorts are designed to be worn throughout the entire race, so you’ll be wearing the same tri suit as you were wearing for the swimming and cycling portion for the running finish.

You don’t want to be running 10km in cycling shoes, with little padding and cushioning.

Running in cycling shoes can reduce your performance and make it more difficult for you to reach high speeds. Instead, a high-quality pair of running shoes will help you to protect your legs from injury and finish the race with an impressive performance.

For the running portion, you won’t need much more in the way of attire other than your running shoes and your tri suit. You also might want to bring some sunglasses to protect your eyes if it’s a particularly sunny day.

What should a beginner wear for a triathlon?

Beginners won’t want to spend too much money on their first triathlon attire, so a tri suit is a good option. This prevents you from having to purchase a separate tri top and tri shorts which can cost more.

You’ll also need some cycling shoes and running shoes. You can use the same pair of sneakers for these activities, although your performance might take a hit.

For the swimming portion, you might need a wetsuit, swim cap, and swim socks to protect your body. Check the triathlon’s rules to see if these are mandatory or optional.