There’s no denying that when it comes to running a triathlon, trying to find your pace is one of the trickiest parts.

As anyone who has ever competed in a triathlon knows, it is a very intense exercise, and it can put your body under a lot of stress. So, finding a pace that works for you is essential.

When you begin a triathlon, it can be very tempting to rush. While you are in that swimming pool, the finish line seems a very long distance away, and you might want to get this discipline done as soon as possible.

However, don’t forget that swimming is just the first part of the race, and you have 2 more types of exercise to do after this. So, it is very important that you don’t stress your body out prematurely.

To help pace yourself in a triathlon, you have to remember that this is a marathon, not a sprint. You cannot afford to tire your body out with short bursts of energy, you need to take your time.

There are some triathletes who will use burst energy in some disciplines, but don’t allow your pace to be too influenced by others. You need to go at a speed that works for you.

You might be better at one discipline than another, so you might choose to pick up your speed when completing this section. But it is important that you do not put your body under too much strain early on as that will impact your pace throughout the rest of the race. 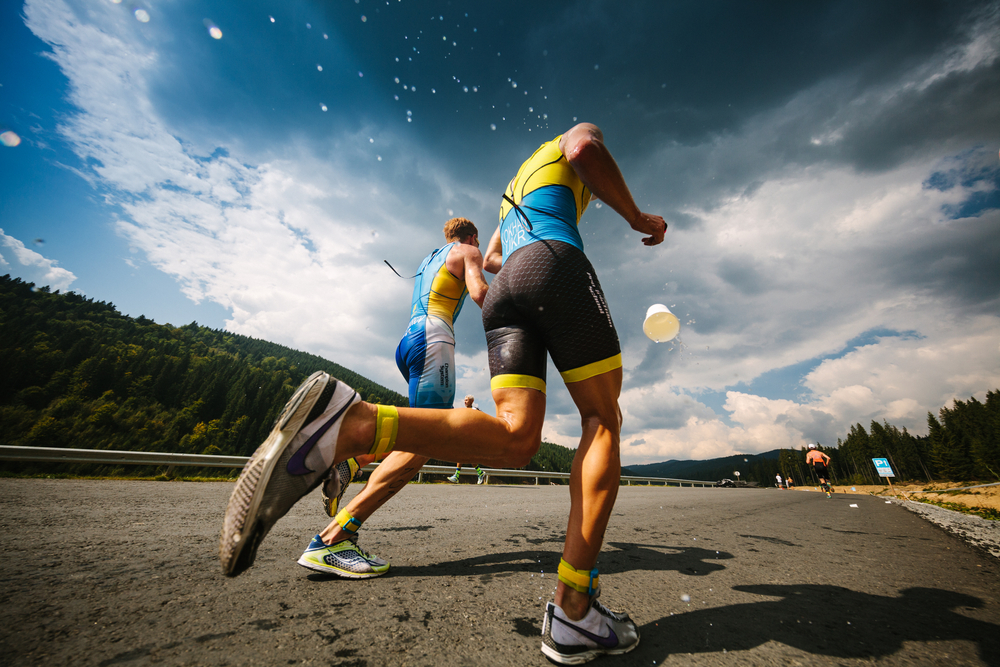 What is a good triathlon run pace?

Every person is different, so what would be considered a good triathlon running pace for one person, might not be the same for another person.

The key to succeeding in a triathlon is to go at your own pace, and not to put yourself under too much strain. It is very easy to do this if you compare your pace with the pace of those you are competing with.

Generally speaking, according to the VDOT calculator, an ideal pace for the running section of a triathlon would be 39.24. This would put the runner’s pace at 8:20/mile, meaning that at this pace the runner would be covering a mile in just over 8 minutes.

This works out at a mile every 500 seconds.

However, people will pace differently for each section of the triathlon. If you are particularly gifted at swimming, you might choose to pick up your pace in the first section of the race, and move a bit slower on.

Likewise, if you are good at cycling, you might choose to go a little slower in the other two sections, and make up the difference on your bike.

Alternatively, you might choose to save your burst energy until the final section if you are a strong runner. Even if you aren’t a strong runner, lots of triathletes reach their best pace in the running section of the triathlon as this is the last discipline and the end is in sight.

What is a good triathlon bike pace?

Some triathletes find that the cycling section of the triathlon is the easiest to pick up speeds. This is often because both the swimming and running sections are very intense on the whole of your body, but in the cycling section, you get to sit down for a moment.

Of course, it is still an intense workout for your legs, but it is a slightly different kind of exercise.

Different triathletes will pace differently for the different sections of the race. So, while some will complete this section quickly, others might do it slightly slower.

However, if you want to do well in the triathlon it is very important that you try to find a steady pace. Even if you aren’t that great at cycling, you cannot let your pace drop too greatly as this will impact your overall speed.

Generally, the majority of triathletes will complete the cycling section of the triathlon at a speed somewhere between 27 and 40 km/hr. In a standard triathlon, the cycling portion of the race is about 40 km.

So, for the faster triathletes, this will mean that they finish the entire cycling section in just one hour. This also means that even the slower athletes will complete this section of the triathlon in less than 1.5 hours.

This is why the cycling section of the triathlon is where a lot of triathletes will make up time if they are slower in other disciplines.

What is a good triathlon swim pace?

So, we’ve taken a look at the pace that you should aim for when doing both the running and cycling section of the triathlon. But what about the swimming section?

This is the first discipline in the triathlon, and because of this you will find that pace differs greatly from one competitor to the next.

This also ensures that they do not tire themselves out too early in the race, meaning that they definitely have energy for the two disciplines that follow.

The majority of triathletes will swim at a pace of approximately 2:02/100 m. This means that it will take them just over 2 minutes to do each 100 m of the race. The swimming section of the triathlon is 1.5k, which means it is 1,500 m.

This means that it will take the majority of triathletes less than 1 hour to complete this entire section of the race.

However, if you are competing in a triathlon, ensure that you do what works for you as if you move at the pace of others, this could negatively affect your overall performance in the triathlon.