A standard triathlon is a race in which participants first swim, then cycle, then run. The distances of these three parts vary depending on the race. Different races around the world require participants to swim, cycle, and run over different distances.

Contents show
1 What is a reverse triathlon?
2 What is the hardest part of the triathlon?
3 Is a triathlon harder than a marathon?

Most people will of course begin with the shortest, and then work their way toward the longer and more arduous races.

Some extreme triathlons can be even longer, these are often called Ironman competitions. 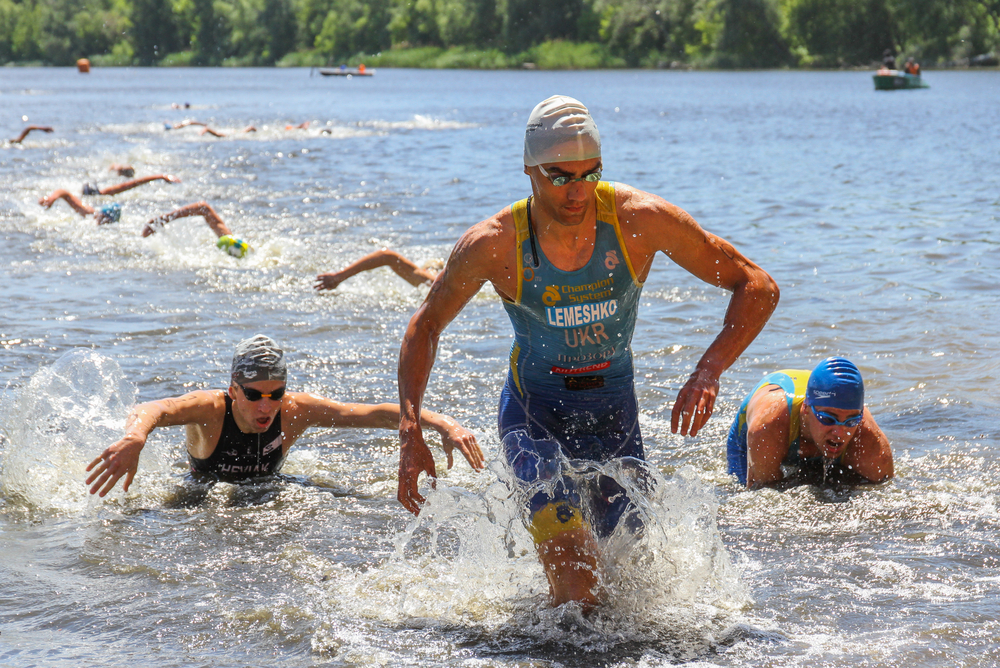 Why is a triathlon swim bike run?

This is often asked as cycling and then running when you have been drenched in water doesn’t seem to be a particularly pleasant experience.

Interestingly, the first triathlons were in France and actually included the participants rowing in a canoe, rather than swimming themselves. This was changed in the early 1920s to include swimming instead.

It wasn’t until the 1970s when triathlons became more popular in the US. It was around this time that jogging became a more common everyday activity for non-athletes.

During this time, people in the US became more interested in competing in races and events outside of professional sports.

The modern triathlon we know today was primarily devised in San Diego by Don Shanahan and Jack Johnstone. The reasoning behind the order of the triathlon is not completely known.

But it is said to have been inspired by Johnstone learning of a biathlon which consisted of a 4.5 mile run followed by a ¼ mile swim. Johnstone took part in this race, but eventually decided to come up with his own that gave more prominence to swimming.

Once Johnstone had the race approved, Shanahan then suggested adding in a cycling element. And the modern triathlon was born.

What is a reverse triathlon?

A reverse triathlon is exactly what it sounds like. The participants begin with a run, cycle in the middle, and then end with a swim.

One reason could be safety. Swimming is by far the most dangerous of the three due to the risk of drowning.

Swimming is also the sport which requires the most skill and experience. This means that, if the swim were at the end, the participants would be in deep water and trying to swim when already tired and fatigued from strenuous activity.

This is not a safe option. So, the discomfort of cycling and running while wet is preferable to the potential danger of drowning.

What is the hardest part of the triathlon?

This will depend on the individual participant. People have different strengths and skills. As well as sports which they prefer. Few people will do a triathlon if they do not enjoy the sports included, unless they only participate for the sake of achievement.

Many people often say that the hardest part of a triathlon is the training. Once you have reached the stage where you are about to actually complete the triathlon, you are at your physical peak and ready to go.

Whereas, when you’re training, you’re still learning how to properly participate in such a strenuous and demanding race.

Is a triathlon harder than a marathon?

This depends on the individual participant and their own strengths. But, generally speaking, as more experience and training is needed, a triathlon can arguably be described as harder than a marathon.

This is primarily due to the training. A marathon takes a huge amount of endurance, but the training is more limited and focused. For a triathlon, the participants need to be able to swim, cycle, and run at almost professional levels in order to compete, let alone do well.

Marathons are also generally less intense and competitive than triathlons. Many people compete in triathlons to prove to themselves that they can do it, and as a feat of strength, determination, and endurance.

While a marathon also shows all of these things, there is a greater focus on taking part and finishing than there is on winning and proving their endurance.

That said, for some people, a marathon would be more challenging mentally. Primarily due to the monotony of the race. In a triathlon, you essentially have three finish lines which you can focus on. This isn’t the case with a marathon, which requires more focus.

Is a duathlon harder than a triathlon?

Not to be confused with a biathlon, a duathlon is a triathlon race in which the swimming is replaced with another run.

A biathlon is a race which has only a swim and a run. For some people, a duathlon is harder than a triathlon. This is often because of the increased intense use of their legs. When swimming, you of course use your legs, but your arms are more important for strength and movement.

When participating in a duathlon, the focus is entirely on the legs to run, then cycle, and then run again. This puts a huge amount of strain on the legs, none of which can be eased during a swim, as in a triathlon.

But, for someone who is not a confident swimmer or doesn’t have much upper body strength, then of course a duathlon will be easier. So it can come down to personal strengths and weaknesses.

How many miles is a duathlon?

As with any other race, the exact distance varies depending on the event. But, a typical duathlon will involve a 1.5 mile run, followed by a 12 mile cycle, followed by a 3 mile run.

The distances will vary, but the balance will usually be along these lines. This is quite similar to the balance of the races in a triathlon.