With athletics season and the Olympics fast approaching, it's time for many of us to brush up on our races! Whether we are keen watchers, fitness fanatics, or interested in taking on a new challenge, the words marathon and triathlon are sure to swirl in our minds.

Often we find ourselves wondering what the difference between these two races is. They both seem intense and challenging,  but how? What is involved in a marathon? And how is it different from a triathlon?

These questions plague us, keep us up at night, and render us useless in pub quizzes! But no more! We have the answers for you, and today are telling you the difference between a marathon and a triathlon. Just keep reading to find out! 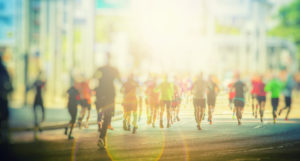 What is the difference between a marathon and a triathlon?

While both a marathon and a triathlon are races that require impressive endurance and fitness, they are quite different. We will detail each race later, but for now, let’s clear up what the difference is!

The main difference is that a marathon features one activity, whereas a triathlon is a combination of activities that make up one competition.

A marathon features just one activity, running. Competitors will run for 26.2 miles over one day. It’s a long and intensive run that requires extensive training beforehand.

Generally, it takes runners between 4-5 hours on average to complete a marathon. This does vary from runner to runner, of course, with professional runners taking less time, but the average is between 4-5 hours.

Triathlon, on the other hand, features three different activities, hence the name tri. Competitors will need to run, cycle, and swim to complete the competition. Competitors need to run and train for that; they also need to swim and cycle for set distances.

Typically, a triathlon will take around 3 hours, depending on the athlete's fitness level. We see professional athletes and Olympians complete triathlons unless time (often breaking records), but generally speaking, 3 hours is the marker of a good triathlon time!

While both involve running, a triathlon involves less running time than a marathon. There are different triathlons, and all have different distances (we will get into this later), but you can expect to run anywhere from 3.1 miles to 13.1 miles in your triathlon!

On the other hand, a marathon is set at 26.2 miles no matter where you run it. Of course, there are some discrepancies, but you will be hard-pressed to find a marathon these days that is not 26.2 miles!

Now that we have covered the main differences between a marathon and triathlon, let’s move on to look at these races in closer detail to learn more about them!

What is involved in a marathon?

A  marathon is fairly easy to explain, so let’s start here! You will run for 26.2 miles, usually on a track or course that the race organizers have plotted. Of course, when training, you can set the route yourself!

Marathons, as we mentioned, take roughly 4-5 hours to complete, although they can take longer or less time depending on the runner themselves. For example, elite runners will finish the race in  2 hours, whereas other runners might take closer to 6 or 7 hours.

When running, it's best not to focus too much on comparing your time with others, and instead, with yourself and train to shorten your time as your fitness improves!

Half-marathons are also a popular option, where runners will run 13.1 miles instead of the full marathon.

These are great training tools for runners preparing to run a marathon or those who prefer a shorter (yet still challenging run!).

Marathons and half-marathons take place across the country and often throughout the year, so you are sure to find one near you if you wish to compete or just have some fun!

What is involved in a triathlon?

As we mentioned earlier, a triathlon involves a run, cycle, and swim to complete the race. It can be a challenging and grueling race that consists of training beforehand to ensure you have the stamina to power through the three activities without suffering from exhaustion.

Triathlons are popular races with a range of people, ranging from fitness enthusiasts to Olympic athletes. There are a few different types of triathlons you can compete in, all with varying distances for each activity.

They range in difficulty, so it's worth taking a look at all four options before choosing a triathlon! They are held across the country, so you are sure to find a triathlon near you that suits your style!

We have included the distances in miles and kilometers, as many races alternate between the two measurements!

Next up is the Olympic, or standard triathlon. This one is, you guessed it, the triathlon we see athletes compete in during the Olympics! You start with a 0.93 miles swim (1.5km), complete a 25-mile bike ride (40km), and finish with a 6.2-mile run (10km).

Also known as the half-Ironman triathlon, this is not for the faint-hearted! You complete a 1.2-mile swim (1.9km), cycle for a whopping 56-mile bike ride (90km), and finish with a 13.1-mile run (21.1km)! That’s half a marathon tacked on to the end of a grueling swim and cycle!

Understandably, these Ironman triathlons take longer than the average 3 hours that we mentioned earlier and require rigorous training beforehand. These aren’t designed with beginners in mind and challenge even the fittest of athletes.

And there you have it, the main differences between triathlon and a marathon are the time, amount of activities, and distance! While a marathon will see you running consistently for over 20 miles, a triathlon will have you in the water, on two wheels, and running before you can relax!

Whichever race you choose to complete, remember that lots of training will be required beforehand to ensure a successful race without exhaustion or injury (hopefully)!