If you are someone who regularly competes in triathlons, then you will know that something that can often slow your overall time down is the transition between each section of the race.

Contents show
1 Do you get changed during a triathlon?
2 How do triathletes change from swim to bike?

Speeding up their transitions is something that can cause a lot of triathletes frustration, but there are lots of different hacks that you can use to speed them up.

Often, transitions take a lengthier amount of time because that is what your routine is. When you are training for a triathlon, it can be very easy to be slow during your transitions because you aren’t racing against anyone.

If you try to speed up your transitions during the practice stages, this will quickly become your routine. After all, practice makes perfect. 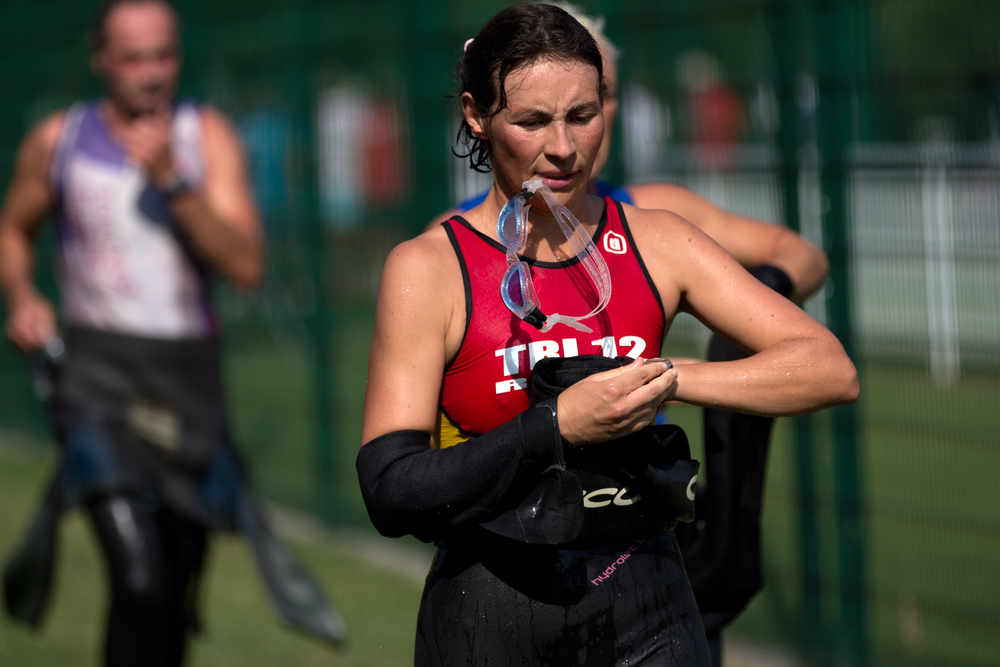 So, the more times that you practice transitioning between swimming, running, and cycling, the quicker you will become on the day of the triathlon.

But, this isn’t the only way that you can make your transitions faster. As well as training yourself into the habit of doing this quickly, you can also speed up your transitions through good preparation.

To do this, you should begin rehearsing your transitions in advance, thinking about the exact actions that you are going to do between each section of the race. In the days leading up to your race, keep rehearsing this in your head until you have a clear picture of what you will do.

The final way to speed up your transitions is to lay out your transition items the day before the race and walk through every single transition. This will ensure that you know exactly where everything is, so that you do not encounter any delays that could slow you down on the big day.

Do you get changed during a triathlon?

Yes, athletes do get changed during a triathlon. This is something that you may not know unless you have watched or participated in a triathlon before.

When people speak of triathlons, they almost describe them as if the athletes dive straight into each discipline without a single break between each section. But this simply wouldn’t be possible.

Every triathlon begins with swimming, so every participant in the triathlon will be soaking wet.

Due to this, it would be impossible for them to then get onto their bicycles for the second discipline of the triathlon without first getting changed.

This is why athletes change between the different disciplines. These changes are known as transitions, and this can be what slows down a triathletes overall time for the race.

Along the route of a triathlon, there will be dedicated areas for changing. These are called transition areas, and they are essentially just changing rooms.

But, clothes aren’t the only things that are stored in these transition areas. As well as a change of clothes, the equipment that is necessary for the different disciplines will be stored within these rooms.

These transitions are often referred to as ‘T’s. So, in T1 (the transition between swimming and cycling), each athlete will have their bicycle stored ready to complete the second section of the race.

The transition between swimming and cycling is often viewed as the most difficult as the athletes have to change, and also need to gather their equipment. So, if you want to speed up your transitions, this is a great one to target.

However, you do not necessarily need to transition. At least not in terms of clothes. While most athletes choose to change, at least between the first two disciplines, some do not.

There are many triathletes who simply complete the entire triathlon in their swimming costume so that they do not lose time to the transitions. The decision is entirely up to the athlete, and there is no right or wrong way to complete a triathlon.

How do triathletes change from swim to bike?

While there are two transitions in every triathlon, the biggest one is, without a doubt, transition 1. Transition 1 is the change between swimming and cycling, and it is the largest as it requires the athlete to not only change their clothing, but also pick up their equipment.

This is why this transition can really be make or break for your overall completion time in the triathlon.

The first leg in a triathlon requires every athlete to swim. To do this, most athletes will begin their triathlon in a swimming costume as this is the best clothing to wear for speed when swimming.

However, a swimming costume isn’t ideal for both cycling and running, so the majority of triathletes change in transition 1.

If you are watching a triathlon, then you will not see the athletes change. This is because there are designated transition areas between each discipline of the race, giving athletes the privacy to change their clothing between each section. If they want to, of course.

So, after the swimming section of the triathlon is complete, most athletes will run into the transition area and try and change out of their wet clothes into something dry as quickly as possible.

A lot of athletes will then remain in the clothing that they wore for the cycling section for the running section of the triathlon.

But, some will choose to change into something different, and others will choose to wear the same outfit for the entire race (swimming, cycling, and running).

The transition areas are there to give all athletes the opportunity to change if they want to, but there are no rules that dictate that they have to.

So, basically, in between the swimming and cycling sections of a triathlon, all athletes are given the opportunity to change if they want to.

They do this in privacy and are usually so quick that you don’t even notice the transition. This is why you might not be aware that triathletes change in between each discipline.