Fitbit released their first device back in 2009, with their original ‘Tracker’ only functioning as a barometer and working out how many calories you’ve burned. Since then, Fitbit has expanded its collection to function to track your heart rate, how much sleep you’re getting, and other health metrics all within just one tiny device.

The Fitbit Charge HR is one of their more budget-friendly activity wristbands that can track your daily activity, your heart rate, sleep, record workouts all on a bright OLED display so you can keep tabs on your health metrics.

If you’re familiar with these sorts of techy devices, then assembling (not that there’s much) and setting up the Charge HR will require minimal explanation. However, for those who are less tech-savvy, there is a manual guide included going through each step of setting up the device.

The Fitbit comes partially charged but we plugged it into our laptop to help it reach full charge so we could begin using it straight away. There is a USB cable included with the Fitbit so you can charge it with either an outlet or through a laptop. We know it’s tempting to chuck any cables into a drawer but try to keep it in the place where you’ll charge your Fitbit, as from experience we know they are very easy to lose.

Once you’ve paired your Fitbit with your smart device, it’ll guide you through how to use all the functions through a clear and bright interface. 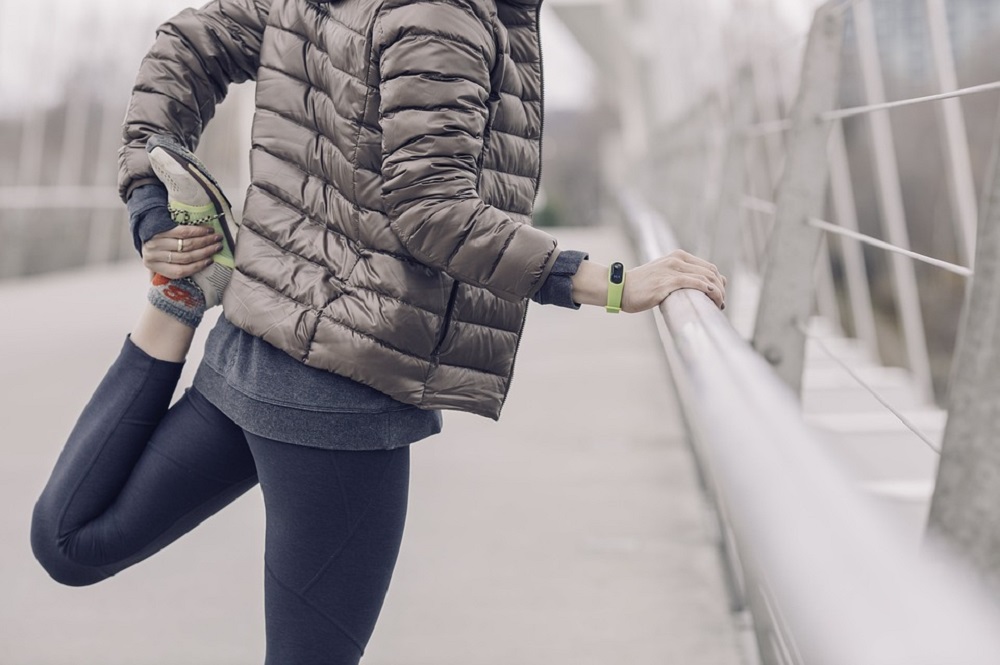 One of the biggest draw-ins about the Charge HR is how small and discrete it is on the wrist, you wouldn’t even know it was a smart tracking device but instead a small bracelet or band. The small digital interface on the band is tap-enabled so you can view all your different metrics and your daily stats by simply touching the display.

The devices come in small and large sizes and have adjustable straps that you can change to fit however comfortably you want. However, due to the heart tracking functions, you may need to wear your Fitbit as close to your wrist as possible.

The band comes in a choice of 5 stylish colors including a bright tangerine or just a standard black, so will suit whatever vibe you’re trying to go for.

If you’re not used to wearing a watch or any kind of accessory on your wrist, then your first few days wearing a Charge HR will feel unnatural, but notably not uncomfortable. The band comes with a proper buckle that seamlessly blends into the design when assembled and doesn’t stick into the skin causing discomfort.

When secured properly on your wrist, the band doesn’t slip or move up and down your wrist too much. Some users claim that their Fitbit gives them a rash, but this is probably due to them either wearing it too tight or even wearing it too loose so it brushes up and down on the skin causing irritation throughout the day.

You’ll get used to wearing your Charge HR very quickly and will soon come to learn the panic and regret when you forget to put it back on after getting in the shower or after it’s finished charging - exercise doesn’t count if you don’t track it right?

Fitbit claims that their Charge HR will last up to 5 days before it needs charging again, and they are true to their word. Despite its numerous functions and constant Bluetooth connectivity to a smart device to help present your stats, the Charge HR battery does have a commendable battery life.

You’ll be able to view the battery status of your Charge HR on your Fitbit app on your smart device, however, your Fitbit will also remind you if it needs charging through icons and LED lights on the digital display on the band.

Charging the device will take around 1-2 hours depending on how drained your battery is which is pretty average for a device of this size. We’d recommend putting your Fitbit on charge whilst you go in the shower in the morning or the evening every few days as you can’t wear it in the shower anyway and should give it adequate time to charge up.

You can charge your Charge HR using your USB cable and connecting it to your computer, however, a more convenient way that we prefer is by using an interchangeable USB plug that you can use in any outlet in your home, this way you won’t have to get your laptop out every time you need to charge the device.

One of the main features of the Charge HR, which features all across Fitbit’s range of smart devices is the step tracking function. It’ll track the steps that you do throughout the day and also any additional steps you do during your workouts. It’ll alert you when you’ve reached your 10,000 steps daily goal, or if you’d rather a higher step goal you can change it in the app.

The Charge HR also has the beneficial function of being able to track your sleep, telling you when you are sleeping lightly or when you’re in a deep sleep, this is done by heart rate monitoring and also tracking your movement during your sleep. Whilst this won’t help you get deeper sleep, it may be able to help identify minor contributors which are affecting your sleep quality like caffeine too late in the day or watching TV just before bed. You can even set a silent alarm on your Fitbit, which will vibrate on your wrist to wake you up, which prevents you from having to use an obnoxiously loud alarm clock.

Another key feature of the Charge HR is the PurePulse Heart rate monitor which automatically and continuously tracks your heart rate to see the intensities of your workout and help you to reach your fitness goals. However, the Charge HR doesn’t have the feature that alerts you when you’re working in the heart rate target zones like other Fitbit devices do.

You’ll also be able to track how many calories you’ve burned throughout the day and during your workouts, this will help if you’re trying to lose or gain weight as you’ll be able to monitor these burnies calories alongside your inputted calories from the day.

The Charge HR will also alert you of any incoming calls you have along with the caller ID on the OLED display of the band as long as your phone is within the connectivity distance. This is helpful if you’re exercising or at work and you can’t always have your phone to hand.

The device is notably splash-proof but not waterproof and will be able to endure sweaty gym sessions or running in the rain, but is not suitable for wearing in the shower or when swimming.

The Fitbit Charge HR connects to your smart device on either a tablet or smartphone via Bluetooth 4.0, so any device you have will have to support this version of Bluetooth. We recommend connecting your Fitbit to your smartphone so you can glance or scan through your metrics throughout the day.

As your Bluetooth will need to always be switched on on your smart device to connect to your Fitbit, it will drain your tablet or smartphone battery quicker than normal, so this is a minor issue if you don’t like to keep a charger on you throughout the day.

There may be some smartphones that are not compatible with the Fitbit app and therefore won’t be able to pair up the device. You’ll need to have new or the latest versions of Apple OS or Android OS on your device for it to be compatible. Those with Huawei or Windows phones experience significant difficulties in trying to pair their devices with their Fitbit.

Now the Charge HR may not come up to scratch compared to an Apple Watch in terms of functionality and cool features, but if you are looking for something that will track your heart rate, sleep and daily activity then it’s a more budget-friendly alternative to help keep up with a healthy and active lifestyle.

The easy-to-use digital interface and simple setup through a smartphone make it a great device for even the least tech-savvy of users.

If you’d like to buy your own Fitbit Charge HR then you can do so right here.