We all have good intentions when we sign ourselves up for a triathlon. We want to get fit and healthy, perhaps even raise some money for a noble cause, but it isn’t until later that we realize we don’t have access to certain training facilities such as a swimming pool.

Should you then back out of the event, or is there a way you can make things work without swim training? Well, the quick answer is yes, but it’s not such a simple question as the answer depends on a couple of variables.

Swimming is sort of like riding a bike, once you get it down, you don’t just forget how it’s done, and as long as you’re working all the same muscles in your dry training sessions, you should be just fine in the water.

That said, you probably have limited experience swimming outside in natural bodies of water.

The sudden drop in temperature can play havoc on your muscles and breathing, so I’d always recommend at least a day trip to a lake or ocean, so you can introduce your body to the chilling transition. 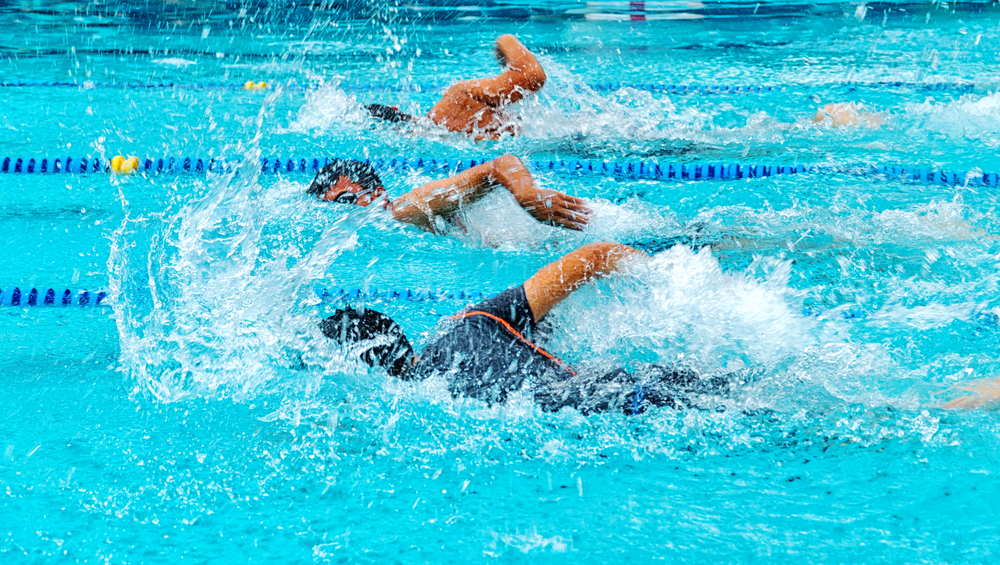 Have you ever swum that far in one sitting before? If the answer is not by a long shot, you’ll definitely need to try and get some wet training in a swimming pool organized. Going in blind to such an intensive swimming challenge can be extremely dangerous.

If your answer was no, not quite, as long as you train hard on dry land and take it easy in that third of the triathlon, you might be okay, but I wouldn’t feel comfortable recommending it.

Bear in mind that you’re already going to be fatigued from the other segments of the race.

Was your answer a resounding yes? If so, I’d bet you’ll be just fine, but I’d still recommend taking it easy in that third of the race. Don’t worry about competing. Hover near the back of the crowd and take your time. You can make up for it in the other two legs of the triathlon.

Can you rest during a triathlon swim?

Rules may vary from race to race, but generally speaking, you are permitted to rest during the swim section of a triathlon. If the water is shallow enough, you can stand up and have a breather. Alternatively, if there’s a buoy or organizer kayak about, feel free to grab hold and take five.

There are; however, some stipulations in place to ensure that nobody uses downtime as a means of getting ahead.

For instance, you’re not allowed to make any forward progress when you’re resting in the water. This would be the equivalent of you hailing a cab in the running portion of the race. It’s considered receiving assistance, which is strictly prohibited.

In light of this, you cannot hold on to any sort of moving object when resting. Stationary boats and kayaks are fine, but you can’t hold on to a moving vessel. Neither can you inch out a few cheeky steps on the riverbed or ocean floor while resting.

It’s also important to bear in mind that you can always request assistance should you need it in an emergency, but once you’ve received assistance, you are unable to return to the race.

Allowing you to get back in the water is deemed irresponsible by medical guidelines, so in this instance, your race would be over.

You may also want to think about how you comport yourself during these rest periods, as if it appears you’re struggling, medical staff have permission to remove you from the race for your own safety. So, rest comfortable, and rest confident.

Use your body language to assure onlookers you’re physically fine and just needed a breather.

How do you train for a triathlon without a pool?

If you don’t have a pool handy to train for the triathlon, you’ll need to do plenty of dryland training that hones the muscles you’ll be using in the water. These are:

Is there a triathlon without swimming?

There are no true definitions of what events a triathlon should consist of, so there may well be one without a swimming third, but this is extremely unlikely.

Triathlon-based duathlons are more common. These awesome races only have two dryland activities, but one of them will be repeated.

For example, the International Triathlon Union Duathlon World Championships held in Ottawa in 2013 consisted of a 3.1-mile run, followed by a 12.4-mile bike ride, then capped things off with yet another 3-mile run.